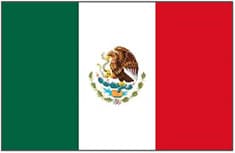 Customs regulations for the import of used household goods into Mexico

According to Mexican laws and regulations, in order to qualify for a free importation of your personal you must follow the following rules:

First – ALL goods must be used by the client for at least six (6) months.
2nd the client is bringing the items into Mexico without the intended for resale.

“Retiree” Visa status: You must show the list if items you intent to bring into Mexico and have it notarized and stamped by the Mexican Consulate in the city of origin.

Do Not Ship personal effects until all the documentation is complete and approved by the destination agent. (The airport holds the shipment for 30 days and ports for 60 days only). If the documentation is not presented by that time, the Mexican government confiscates the shipment. Inform the destination agent of the estimated time of arrival of the shipment at the Customs House of Port of Entry in order for them to proceed with the import process.

Have the moving company set up the transportation to avoid unnecessary demurrage and storage charges.

Sea shipments that are consigned to Mexico City terminal are handled directly by the contracts that the steamship lines. Agents cannot accept C.O.D. (Cash OnDelivery) charges. The Destination agent can only collect these charges for destination services.

If you secede to ship Items that are Prohibited or Restricted as per the lists below, you are taking the risk that the customs authorities will seize the entire shipment.

Ports: Altamira, Manzanillo, Tampico, Veracruz and Laredo (overland from US)

(Must have lived 2 years abroad)

The below mentioned items are subject to approval by the Mexican customs and agricultural authorities. Please inform us as soon as possible if you plan to send any of the following items:

Note: Although an importer with a diplomatic status is allowed to import items on the Prohibited List, consultation with the Destination Agent is advised

You should under no circumstances include any prohibited items in your shipment. Heavy fines will be issued and the entire shipment could be seized. Do not try to hide illegal items inside the shipment. Mexican customs inspections are thorough and illegal items will most likely be found by the authorities. Do not include any of the following items:

Only dogs and cats are allowed importation without special permission. For all other pets, consult with the Destination Agent for current requirements and regulations.
Subject to duty of pets are valued over USD$5,000.
For pets arriving without their owners, it is recommended to send documents including AWB in advance via fax, to avoid delays in releasing pets. It is recommended to arrange for arrival at the beginning of the week, to avoid pets being kept in Customs control over the weekend, as there is not staff on site to care for them.

Diplomats can import vehicles duty free and do not need to be present to clear the vehicle and can utilize any port of entry.

FM-3 Visa holders may only use Altamira, Veracruz and Tampico ports and must be present during clearance. Vehicles crossing via land into Laredo must be driven by the owner than driven to the destination by the owner. Vehicles are subject to duties & taxes to be paid at Customs. Vehicle cannot be included in household goods shipment.

Returning Nationals may import a vehicle, however it is prohibitive and the Destination Agent should monitor the entire process closely.

Mexico implemented emissions requirements for vehicles. Requirement for emissions certification should be obtained by the website for Mexican Customs.

NOTES:
Entry & Exit Requirements: All non-Mexican citizens must have valid immigration documents including one of these visa categories: FMM, FM2, FM3 or FME. U.S. citizens who are also Mexican nationals are considered to be Mexican. Dual nationality status could result in the delay of notification of arrests and other emergencies or hamper U.S. Government efforts to provide consular services. Dual nationals are subject to compulsory military service in Mexico; in addition, dual national males must register for the U.S. Selective Service upon turning 18. Those possessing both U.S. and Mexican nationalities must carry proof of citizenship of both countries. Under Mexican law, dual nationals entering or departing Mexico must identify themselves as Mexican. Under U.S. law, dual nationals entering the United States must identify themselves as U.S. citizens.

Safety & Security: US citizens are encouraged to enroll in the Smart Traveler Enrollment Program, to stay current with the latest safety and security announcements dispersed by the Embassy in your area.

Your enrollment can also help the Department of State reach your family and friends in case of emergency. In its efforts to combat violence, the Government of Mexico has deployed federal police and military troops to various parts of the country. Government checkpoints, often staffed by military personnel, have been erected in many parts of the country, especially, but not exclusively, in the border area. U.S. citizens are advised to cooperate with personnel at government checkpoints when traveling on Mexican highways.

Crime: Street crime, ranging from pick pocketing to armed robbery, is a serious problem in most major cities. Carjacking is also common, particularly in certain areas. The homicide rates in parts of Mexico have risen sharply in recent years, driven largely by violence associated with transnational criminal organizations. In some areas, municipal police forces are widely suspected of colluding with organized crime. In others, police officers are specifically targeted by members of transnational criminal organizations. Because of the dangerous situation in which police officers operate, one is advised to take a nonthreatening posture when interacting with police and to cooperate with police instructions.

Kidnapping, including the kidnapping of non-Mexicans, continues to occur. Express kidnappings, i.e., attempts to get quick cash in exchange for the release of an individual also occurs along with a common scam throughout Mexico called ‘virtual’ kidnapping by telephone, in which the callers typically speak in a distraught voice in a ploy to elicit information about a potential victim and then use this knowledge to demand ransom for the release of the supposed victim. Information that can be used against victims may also be obtained from social networking websites. Credit card “skimming” is also on the rise via skimming machines, tellers with in banks or merchants. One is advised to frequently review account activity.

Health: Mexican pharmacies cannot honor foreign prescriptions. U.S. citizens have been arrested and their medicines confiscated by Mexican authorities when their prescriptions were written by a licensedU.S. physician and filled by a licensed Mexican pharmacist. The importation of prescription drugs into theUnited States can be illegal in certain circumstances. U.S. law generally permits persons to enter theUnited States with only an immediate supply (i.e., enough for about one month) of a prescription medication. Tap water is unsafe and should be avoided. In high-altitude areas such as Mexico City (elevation 7,600 feet or about 1/2 mile higher than Denver, Colorado), most people need a short adjustment period. Air pollution in Mexico City and Guadalajara is severe. Those with heart or respiratory problems should consult their doctor prior to relocation.

It is advisable to protect the personal effects against rain since the Mexican Ports & Customs houses are saturated and sometimes goods are placed in the open and must therefore be well protected against the rain.

Important:This information is intended for general guidance. Forward Van Lines International cannot take responsibility for any errors or oversights or for any loss or damage that may occur from its use. It is advisable to contact the Mexican Consulate at http://consulmex.sre.gob.mx/miami/ for more information prior to your shipping.