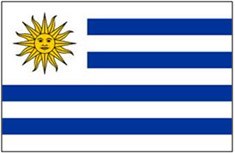 To import firearms and ammunitions the consignee must obtain a Uruguayan Ministry of Defense permit before shipment is made. Otherwise firearms will be retained by Customs.

Household goods and personal effects shipments or unaccompanied luggage must arrive within 90 days from Shipper’s arrival in Uruguay.

Returning Uruguayans (including Diplomats and Uruguayans who have been working for international organizations).

The temporary import of the car will not exceed a maximum term of 18 months (to be considered from the exact date of clearance), after which vehicle will have to be re-exported

Recommendation that full information on shipper and account in Uruguay, be forwarded to our Agent prior to shipping car

All the following documents are required in order to obtain diplomatic franchise with Uruguayan Foreign Affairs Ministry.

Uruguayan Diplomats and Uruguayans who have been working for international organizations

As of June 1st 2002, Uruguayan Customs Regulations state that returning Uruguayans are no longer authorized to import used cars.  Pertinent regulation which was in force (Decree 567/1993) has been abolished.

IMPORTANT: This information is intended for general guidance. Forward Van Lines International cannot take responsibility for any errors or oversights or for any loss or damage that may occur from its use.  It is advisable to contact the Uruguay Embassy at http://www.uruguaymiami.org/contenido/ for more information prior to your shipping.